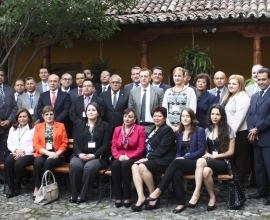 Following the ministerial conference in San José, Costa Rica, in December 2014, in which five regional documents for strengthening policies on social-labour reintegration of prison inmates were approved, the heads of Latin American prison administrations met in Antigua, Guatemala, on 29th and 30th June.

First a guide to dissemination and effective application of the guidelines for reintegration of women, called “Repairing inequality”, was presented to and submitted for evaluation by the participants. This illustrated guide is an educational and pedagogical document that aims to provide knowledge of the guidelines and expand its dissemination among the diverse stakeholders working with women prison inmates. The representatives of the countries had a very favourable opinion of this instrument, which will be finalised and released to all of them in coming weeks.

Next, the issue of implementation of the regional rules for reintegration of prison inmates was addressed. Various countries in the region, such as Brazil, which has disseminated it at the federal and state level, are using this model, wholly or in part, to strengthen their social-labour reintegration policies. Other countries still need assistance to create or expand their legislation or work processes in this area. The rules represent for them a very interesting tool for defining priorities and organising their interventions.

The workshop was organised by EUROsociAL, the cooperation programme of the European Union, with the Conference of Ministries of Justice of the Ibero-American Countries (COMJIB) as the operational partner. The sessions were chaired by its new Secretary-General, Arkel Benítez Mendizabal, and by representatives from Expertise France as the coordinating partner in this thematic area. This meeting was held at the facilities and with the valuable support of the Spanish Cooperation Training Centre in Antigua, Guatemala.