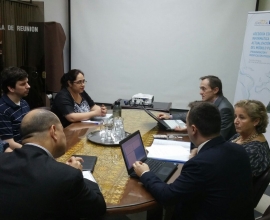 Within the framework of the EUROsociAL II Programme, financed by the European Union, between 12th and 16th October 2015 an expert advisory mission was carried out to Paraguay's Directorate-Generate of Budget. The purpose was to conduct a diagnosis of the IT situation of the budget module and make a series of recommendations for effective implementation of the multi-annual budget according to the criteria established in the Fiscal Responsibility Act and its secondary legislation.

Since the approval of the Fiscal Responsibility Act on 29th October 2013, Paraguay has been obliged to follow a series of fiscal rules, create a multi-annual budget through establishment of a medium-term fiscal framework, and evaluate the efficiency and impact of public spending.

EUROsociAL has been supporting the Directorate-Generate of Budget (DGP in Spanish) since 2012 in different actions oriented towards improving the quality of public spending and implementing the Fiscal Responsibility Act.

The main objective of this action, as well as the rest of the activities carried out in Paraguay, is to create an efficient and effective public budget. This activity will enable the officials of Paraguay's Directorate-General of Informatics and Communication of the Ministry of Finance to perfect their IT tools to provide a more effective basis for creating the multi-annual budget.

This activity is part of the Budget-Plan Link action of the EUROsociAL Programme, financed by the European Union and coordinated by the FIIAPP, with Spain's Institute for Tax Studies acting as an operational partner.