20 years of action to reduce poverty in Paraguay 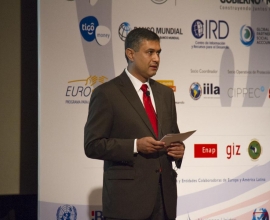 The Secretariat of Social Action (SAS) of Paraguay, led by Minister Héctor Cárdenas, recently published a report analysing the achievements of 2015 and the remaining challenges

The year 2015 was intense for the SAS, which just celebrated the 20th anniversary of its founding as an institution and the 10th anniversary of the Tekoporã programme. This emblematic cash transfer programme with co-responsibility today reaches 131,000 families living in situations of poverty and vulnerability.

The EUROsociAL II Programme has strategically supported the strengthening of the SAS since 2013. At the request by the Ministry of Social Action, the EUROsociAL Programme of the European Union has effectively become an important partner of the SAS in promoting a series of organisational and management changes. Thanks to the support of experts from Argentina, Brazil, Spain, and Italy, advising has been provided to the SAS for creating its Institutional Strategic Plan, reorganising its management system to make it more results-oriented, while also reviewing its structure and organisational chart. EUROsociAL II also collaborated in restructuring the Tekoporã programme and obtaining ISO 9001/2008 Quality Certification for it, and in holding the international seminar "Tekoporã, 10 years of progress in social protection", attended by, among others, the Former President of the Federative Republic of Brazil, Luiz Inácio Lula da Silva; the President of the Republic of Paraguay, Horacio Cartes; and the Director for Cooperation with Latin-America and the Caribbean in the Directorate-General for Cooperation and Development of the European Commission, Jolita Butkeviciene.

The fruits of the EUROsociAL collaboration with the SAS are being increasingly noted in programmes and projects, as highlighted in this report.