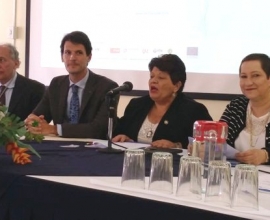 On the 31st, the Costa Rican institutions the programme has supported over these years, and other institutional stakeholders, participated in the Review and perspectives of the EUROsociAL Programme in Costa Rica meeting organised by the Delegation of the European Union and the Commission European Programme for social cohesion in Latin America.

The meeting was opened by Costa Rica's Minister of Planning, Olga Martha Sánchez Oviedo, and the European Union Ambassador to the country, Pelayo Castro Zuzuarregui. The Minister also presented, in an inaugural conference, the progress and challenges of the 2015–2018 National Development Plan (available here for consultation), the lodestar for the new phase of the programme.

The purpose of the meeting was, on one hand, to analyse the results achieved, strong points, and critical points in the implementation of EUROsociAL II, and, on the other, to get a glimpse of the main methodological and agenda orientations for the programme's next five-year phase.

Main conclusions on the results achieved and EUROsociAL's cooperation method