The Delegation from the European Union, together with EUROsociAL, organised the Honduras Country-Encounter to analyse the advances made and to orient actions for the upcoming phase of the programme 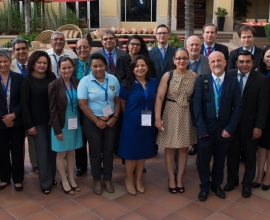 The Programme included the participation of the Honduran institutions that the Programme has been assisting in recent years.

The Encounter was inaugurated by ambassador María del Carmen Nasser de Ramos, the Under-Secretary of International Cooperation and Promotion of Honduras, who highlighted that the actions by EUROsociAL II these years have been in line with the government's priorities and the good results obtained in strengthening Honduran institutions.

Also during the inaugural ceremony, the ambassador of the European Union in Honduras, Ketil Karlsen, emphasised how EUROsociAL has built its activities based on the demands from Honduran institutions, and he highlighted that the important thing, beyond the quantity of activities carried out, has been the quality of the results obtained within the scope of building and strengthening the institutional structure in the country. These good results respond in general to the good match between the priorities of the Plan of the Government of Honduras (2014-2018) and the subject areas of a regional programme such as EUROsociAL II and the areas of bilateral cooperation between the EU and Honduras, thereby bolstering great complementarity in both types of actions.

In turn, the Secretary of State and General Coordinator of the Government of Honduras, Jorge Ramón Hernández Alcerro, presented the advances made in the Government Plan and gave his preview about where efforts should focused in the future in the fields of security, employment, transparency, and human development and the fight against inequality.

After the inaugural ceremony, the coordinator of the Technical Unit of Public Finance and Democratic Governance of EUROsociAL II, Ignacio Soleto, gave a brief summary of the programme's actions in Honduras, thereby highlighting the programme's importance in coordinating between players and providing attention for vulnerable groups. Likewise, he underscored that the Central American country has been one of the most active ones in the Programme, with a total of 89 Honduran institutions participating in the 177 activities in which EUROsociAL has provided support, including the participation of 863 Hondurans (46.2% men and 53.8% women).

After presenting some relevant experiences in the areas of Justice, Social Policies, Public Finance and Democratic Governance, there was a discussion group among the participating institutions regarding their work experience with EUROsociAL, specifically about the demands made and their alignment with the country's development objectives, about the role of EUROsociAL as a facilitator of processes and about the programme's working methodology.

The majority of attending institutions stated their satisfaction with EUROsociAL's innovative methodology (peer learning, demand orientation, search for results, regional dimensions with transfer to national policies), as well as its capacity to promote and accompany inter-sector and intra- and inter-institutional actions.

The highly qualified nature of the personnel who offered technical assistance was highlighted. They often had knowledge of the local reality, which facilitated the immediate practical implementation of acquired knowledge, thereby translating into specific and tangible reforms. It was also mentioned that the European Union's support in the processes of preparing and implementing policies was especially useful for the institutions, given that it allowed learning about the reality and experiences of various countries, which facilitates the adoption of regulations or processes that can be approved internationally.

There was a debate about the extent to which a programme such as EUROsociAL should get into providing "more political" cooperation, in the sense of providing follow-up until the end of reform processes and working more with parliamentarians and other political decision-makers. Some of the participants requested that EUROsociAL go more into depth in the facilitator role that it could play to favour the creation of mechanisms that not only foster the creation of political consensuses but also foster work between different institutions.

Both the programme's respect for government priorities as well as its flexibility to adapt to the times and processes of the country were highlighted, although acknowledging that it was necessary to continue emphasising alignment with the country's agenda, seeking synergies between and complementarity of actions with other sponsors and avoiding the duplication of efforts.

Most of the institutions acknowledged the need for EUROsociAL to support the national agenda, and it was therefore requested that the Programme, together with the Delegation of the European Union, maintain a high degree of mutual consultation with General Coordination of the Government and with the Under-Secretary of International Cooperation and Development.

Particular interest was drawn to speeding up the start times of the next phase of the programme to provide continuity to what has been carried out up to now.

EUROsociAL was represented by the coordinating partners, the International and Ibero-American Foundation for Administration and Public Policies (FIIAPP) and the Italian-Latin American Institute, (IILA) and by the operational partners, CEDDET, IDLO and CISP.