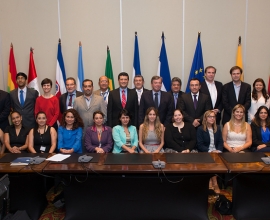 Within the framework of the 11th RTA meeting in Tegucigalpa, the results of EUROsociAL's work with the network

The networks' work programmes include actions at the national level for both adapting and contextualising successful public policy experiences from one country to another and subsequent implementation of the agreements reached in the network.

The work with the Transparency and Access to Public Information Network (RTA) is a clear example of the potential of these types of partnerships and how they can be translated into national public policy changes. The RTA is a formal space for dialogue and cooperation that promotes the exchange of knowledge and experiences in the area of transparency and access to information among its members, mainly the access to information Guarantor Bodies in each country.

The network is made up of 15 institutions from 14 Latin American countries (Chile, Costa Rica, Colombia, Peru, Argentina, Panama, El Salvador, Honduras, Mexico, Uruguay, Ecuador, Brazil, Bolivia, and Guatemala), Spain's the Council for Transparency and Good Governance, the International and Ibero-American Foundation for Administration and Public Policies (FIIAPP), the Organization of American States (OAS), and the World Bank. The network is led by the Council for Transparency of Chile (Presidency) and the Access to Public Information Unit of the Office of the Presidency of the Republic of Uruguay (Executive Secretariat).

One of the most significant results of the Democratic Governance Area of EUROsociAL II, coordinated by FIIAPP, was the support given to the RTA's strategic projects, particularly those in the following areas: 1) Alternative dispute resolution mechanisms; 2) Creation of a system for measuring the right of access to public information; 3) Regional Records and Archives Management Model; 4) Transparency of political parties.

In order to consolidate and share the main results of these initiatives, on 6th and 7th April there was a joint workshop in Tegucigalpa (Honduras) between the RTA and EUROsociAL within the framework of the 11th Annual RTA Meeting. The activity was organised by FIIAPP and the Institute for Access to Public Information (IAIP) of Honduras, with the support of the Council for Transparency of Chile and the Access to Public Information Unit of the Office of the Presidency of the Republic of Uruguay.

It should be noted that prior to the event, the RTA members were received at the presidential palace by the President of the Republic of Honduras, José Orlando Rodríguez Alvarado, with the attendance of the EU Ambassador to Honduras, Ketil Karlsen, and the Commissioner-President of the IAIP of Honduras, Damián Pineda.

In addition, the RTA meeting coincided with the evaluation of the EUROsociAL programme in Honduras. As all the main officials of the Latin American guarantor bodies for the right of access to public information were present, the evaluators had the opportunity to learn about the nature of the network and the results achieved within its framework.