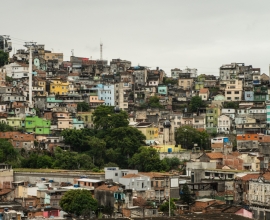 The European Union will contribute to policy changes in three priority areas: social policies, democratic governance, and gender equality. Meet the new phase of the programme through website www.eurosocial.eu/en

European Commission launched a new phase of EUROsociAL+, which is an EU programme to increase social cohesion in Latin America.

Through the programme, which will have a budget of €32 million for the period 2016-2021, the EU will contribute to policy changes in three priority areas: social policies, democratic governance, and gender equality.

EU Commissioner for International Cooperation and Development, Neven Mimica, said: "Inequality represents a common concern in our two regions. Programmes such as Eurosocial+ show clearly the EU's added value in supporting the efforts of Latin America to increase social cohesion by sharing our valuable experience in this area with partners in the region."

Despite advances in the area of social cohesion, Latin America continues to be the most unequal region in the world; not just regarding income levels but also concerning access to basic public services, the discrimination of vulnerable groups, and the exercise of human rights. The EU stands ready to support the efforts of Latin America in this respect by supporting key policies and reform processes for gender equality, social protection and democratic governance, all of which are cornerstones for cohesive societies.

EUROsociAL+ marks the third phase of the EUROsociAL programme and builds on the successes of its predecessors with a strong results-oriented approach.

EUROsociAL is a European Commission programme for cooperation between Europe and Latin America. Its objective is to contribute to changes in public policies that improve social cohesion through peer-to-peer learning and experience exchanges between counterpart institutions in the two regions.

The first phase of the programme (2005-2010) contributed to the formulation of new public policies, to the introduction of innovations within the framework of existing policies, and to the strengthening of institutional capacities of the government agencies responsible for these policies.

The second phase of the programme (2011-2015) lent continuity to this ambitious policy mandate, by ensuring that the exchanges between the EU and Latin Amercia are not limited solely to sharing knowledge but become learning experiences that materialise in action oriented towards bringing about a change in public policy which will eventually contribute to improving social cohesion.

For more information about EUROsociAL+, link to new website www.eurosocial.eu