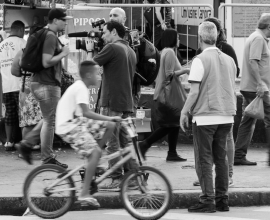 Vulnerable neighbourhoods in Rio de Janeiro were the location for filming projects related to access to justice, combating racism, and the fight against gender violence

A team from Informe Semanal, the weekly news magazine of Radiotelevisión Española (RTVE), and a team from EUROsociAL spent a week together in Rio de Janeiro looking for stories and locations to showcase this European Union cooperation programme's work in the areas of access to justice and citizenship, combating racism, and the fight against gender violence in Brazil.

The first part of the joint mission was set in Cidade de Deus, an outlying neighbourhood of Rio de Janeiro located in Jacarepaguá, very near the Olympic Park where numerous trials will be held in August for the Rio Olympic Games. This neighbourhood is the site of the “Casa de Derechos” (House of Rights), an initiative that provides services related to access to justice and law, and the exercise of citizenship. The “Casa” gives the community more integrated access, all under one roof, to conflict mediation, acquisition of citizenship (and therefore access to documentation), support in confronting human trafficking, and assistance to victims of illegal work or gender violence. This project, which has helped pacify this area of Cidade de Deus, has the support of the Rio's Secretariat of Justice for expansion to other zones in the State of Rio, and of Brazil's Ministry of Justice for implementation in other states.

With respect to the situation in vulnerable neighbourhoods of Rio and other Brazilian cities, the visiting journalists were also able to see how the issue of violence against young Afro-Brazilians is treated as a public policy in the justice system. As a result of EUROsociAL's support, for the first time concrete actions are being taken to link two problems formerly treated separately in Brazil: barriers in access to justice and racial discrimination.

Another part of the mission was focused on learning about work being done to address violence against women, a serious problem in Brazil for which EUROsociAL's help was requested to promote policies to combat this scourge. This was the start of joint work with Brazilian institutions to implement a national and federal protocol for investigation of gender violence offences. The RTVE reporters were able to learn about all of this previous work and its continuation through interviews with Adriana Mello, a judge in Rio, and Valeria Scarance, a prosecutor in São Paulo. In addition, they saw first-hand the daily work of a gender violence tribunal that any woman can turn to with a complete assurance that she will be able to fully exercise her rights.

The EU Delegation in Brazil also participated through the EUROsociAL focal point and cooperation attaché, Asier Santillán, who, taking advantage of his geographic proximity due to his presence in Brazil, explained the cooperation context of the European Union in Brazil.

Institutions that form part of EUROsociAL have made contributions to all of these lines of work, including organisation of the informative mission by FIIAPP, coordination of the Justice actions by Expertise France, and implementation of the different lines of work shown here by the Spanish Law Society Foundation, COMJIB, IDLO, and JCI.

The segment will be broadcast soon on Informe Semanal, the most venerable space on Spanish television, which alternates stories on the events of the week with special monographic reports.