Peruvian institutions take stock of EUROsociAL's activity in their country 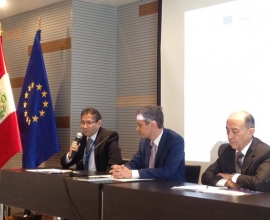 The meeting was opened by the Deputy Minister of Human Rights and Access to Justice, Ernesto Lechuga, and the Head of Section of the EU Delegation to Peru, Stefaan Pauwels. Ambassador Irene Horejs also shared a few words with the participants

This week in Lima (Peru) the EUROsociAL in Peru - “Evaluate to Improve” country meeting was held, at which the programme's activity in this country in its second phase (2011-2015) was analysed and assessed comprehensively.

In addition to Peru, similar country meetings are being held in other countries in the region in collaboration with the Delegations of the European Union. European cooperation with Latin America is entering a new phase, and it seems like a good time to reflect on the contributions that some emblematic programmes, such as EUROsociAL, are making to solving the varied problems the countries face.

This is the first time an exercise of this type, bringing together all the institutions that have participated in the programme, has been held in Peru. Although most of the work done has been sectoral in nature and not in response to a country strategy, these meetings are serving to analyse and reconstruct the programme's country vision.

The meeting was opened by the Deputy Minister of Human Rights and Access to Justice, Ernesto Lechuga, and the Head of Section of the EU Delegation to Peru, Stefaan Pauwels. Ambassador Irene Horejs also shared a few words with the participants, highlighting the achievements of EUROsociAL in improving social cohesion in countries and its peer-to-peer learning approach to cooperation.

The various institutions at the meeting stressed, above all, the flexibility of the programme in adapting to their pace and roadmap changes, and rated highly the ability to work with counterparts, who have had similar experiences, for resolving bottlenecks. Another issue they emphasised was the programme's regional focus, which has allowed them to compare themselves to other countries, see similarities and find out where they stand at the regional level. This has also allowed them to build bridges with each other.

In coming months a new phase of the programme, EUROsociAL+, will be kicked off, and all the institutions talked about the challenges they will be facing in their different sectors.