Paraguay implements a tax barometer with the support of EUROsociAL 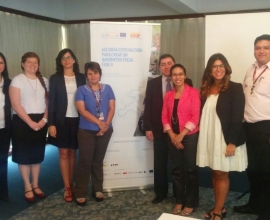 The EUROsociAL Programme, financed by the European Union, supported the creation of a tax barometer in Paraguay as a tool for improving its decision-making capacity based on knowledge of taxpayers' views on taxes in key aspects of tax policy, such as use of and satisfaction with public services, social perception of tax fraud, and the image of the State Under Secretariat of Taxation (SET), among other issues.

With the objective of promoting voluntary tax compliance by citizens, advanced tax agencies try to devise strategies based on a closer relationship with taxpayers in order to learn their needs, provide them with better service, and improve their corporate image. To do so, it is essential to have tools for measuring taxpayers' opinions on taxation so that the agencies themselves have quantitative and qualitative information on the social perception of their tax system and tax management that will allow them to modify, focus, and improve their strategies and tax policies.

To this end, the EUROsociAL Programme, with technical advising from Spain's Institute for Tax Studies (IEF) and in coordination with the SET, designed a support itinerary structured in different phases for the design and creation of the tax barometer in 2015.

As a first step, two IEF experts travelled to Asunción in February 2015 for an expert advisory mission at the SET. This first phase was oriented towards the design of the tax barometer and training the Paraguayan civil servants on survey and sampling methods. From July to September 2015, field work was done on the tax barometer at the Directorate-General of Statistics, Surveys and Censuses (DGEEC).

The second and final phase, completed in November, aimed to support the inter-agency team of the SET, the Secretariat of State for Economy (SEE), and the DGEEC in the analysis and utilisation of the data, as well as with the possibilities for preparing a report using the results from the tax barometer.

It should be noted that to assume the functions related to the tax barometer, a multidisciplinary and inter-agency team made up of representatives of the SET, the SEE, and the DGEEC was formed which provided its experience and network of survey workers for implementation of the field work for the study.

A contract-convention was signed for this purpose between the SET and the DGEEC to formalise this collaboration, thereby making it possible to implement the questions of the Paraguayan Tax Barometer questionnaire within the latter's “Continuous Employment Survey”, specifically in the wave of the third quarter of 2015. This convention no doubt facilitates institutionalisation of the tax barometer over time, so that the study is not simply an isolated government project but rather is intended as a state project.

This activity is within the framework of the Reform of Tax Systems action of the Public Finance area of the EUROsociAL Programme, financed by the European Union and coordinated by FIIAPP, in which Spain's Institute for Tax Studies and the CIAT are acting as operational partners.