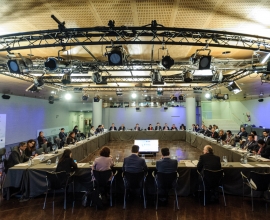 Colombia, Peru, Paraguay, Costa Rica, Honduras, El Salvador and Ecuador will host the country meetings at which the demands of these countries and EUROsociAL's responses will be analysed, the results presented, and lessons drawn for the next phase of the Programme. These discussions will take place within the context of a new period facing the European Union's regional cooperation with Latin America, for which it is relevant to gain a deeper understanding of the responses regional programmes can provide to address the realities of the different Latin American countries.

For EUROsociAL, which has already started moving in this direction, the meetings will also serve to assess the main impacts and most important features of its methodology and/or the coordination between thematic areas, and to discuss the future agenda and the scenario for potential demands to be tackled in the upcoming phase, which will be implemented under the name EUROsociAL+.

The protagonists of these meetings will once again be the countries that have participated in EUROsociAL in the various national, regional, sectoral and cross-cutting lines of work, laying the groundwork for the discussion based on their experiences. The European Union Delegations will coordinate the discussion, with the participation of the coordinating and operational partners of the Programme who have implemented the responses over the past five years.

The first meeting will be held in Bogotá, Colombia, on 3rd March, with APC-Colombia as the co-organiser. It will be followed by the meeting in Peru (Lima, 15th March), Paraguay (Asunción, 18th March), and Costa Rica (San José, 31st March). The country meetings of Honduras (Tegucigalpa, 5th April), El Salvador (San Salvador, 13th April) and Ecuador (Quito, 18th April) will be held in April.