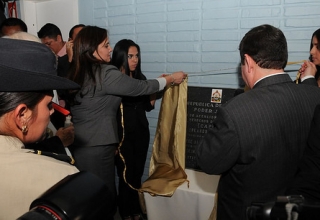 In 2008, the Ibero-American Judicial Summit, with the support of EUROsociAL (first phase), prepared the 100 Brasilia Rules, which primarily concern access to justice by vulnerable persons from the position of demanding that judicial systems serve as real instruments for defending people's rights, especially those of the most vulnerable.

The second phase of the programme resumed this line of action and focused on effective application of the Brasilia Rules, promoting effective access to the justice system through the elimination of barriers that limit or prevent the exercise of fundamental rights by vulnerable populations.

Specifically, this action is improving procedural aspects identified as barriers to access to justice through protocols of best practices.

Centre for attention to and promotion of rights for women: Overcoming the barriers that separate institutions from women victims of violence in Honduras.

Cidade de Deus House of Rights in Brazil. Bringing rights to and facilitating the exercise of citizenship in Cidade de Deus, Brazil.